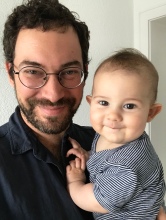 Hi. I’m Fabian Harmik Stelzer, a dad and tech entrepreneur based out of Berlin. I’m half German, half Հայ, father to Mathilde and married to Luise Katharina Müller. On this site I write about AI, startups, history and politics. UPDATE: I’ve moved my writing to Substack: Inverting The Obvious.

After selling my first company & some post-exit mini retirement, I have founded eigencorp GmbH in 2020, which is currently in stealth mode.
I occasionally help machine learning teams with their go to market execution.

In 2009, I co-founded a machine learning / computer vision business known as EyeQuant (with my neuroscience professor Dr. Peter König). EyeQuant became one of Europe’s first applied ‘narrow’ AI companies, serving hundreds of enterprise customers such as Google, Spotify, Ebay and Canon. I led the company as CEO until its acquisition in July 2018.

My work as an entrepreneur has been featured in Forbes, WIRED, FastCompany, VICE Motherboard, GigaOM and Inc. Magazine, and I’ve spoken about entrepreneurship and machine learning at the Max Planck Institute for Human Cognitive and Brain Sciences, the University of Oxford (Oxford Forum), the London School of Communication Arts 2.0 and at Hult International Business School, London.

Most importantly, I learned many a things about startups, team building, the SaaS business, sales, machine learning, narrow AI, M&A and the alchemy of value creation throughout the process.

From 2018 – 2020 I’ve been an appointed member of Germany’s Federal Minister of Economic Affairs’ Advisory Board for Digitalization & Startups (Beirat Junge Digitale Wirtschaft).
I’ve occassionally reviewed AI startup funding proposals for the European Commission as part of H2020.
In 2018, I was an appointed member of the Bundesfachkommission KI at the CDU’s Economic Council (CDU Wirtschaftsrat). Note that I’m politically extremely all over the place and not a member of any party.

You can reach me via fabian at this domain.